In this chapter Ulysses and his crew have to sail by the Sirens. The Sirens are very deadly because they sing so beautifully that sailors have to go to them, when they get to the Sirens they are killed and the Sirens use their bones for instruments. Ulysses made his crew put a lot of wax in their ears so they wouldn't want to go to the Sirens. Ulysses kept his ears unwaxed but had his crew tie him up to the mast so he couldn't get free and go to the Sirens. When Ulysses hears the Sirens he is immediately attracted to them and tries his absolute hardest to get himself free. At one point he breaks free from the mast and tries to jump in the water and swim to the Sirens but his crew ties him up again. Finally they get past the Sirens and when Ulysses crew see his face relax they know the Sirens are gone and that they can take out the wax in their ears.


Questions to Discuss
1. Was Ulysses right to not have put wax in his ears or should he have put wax in his ears also?
2. What emotions do you think that Ulysses went through when he heard the Sirens singing?
3. If Ulysses didn't have an obedient crew would they have been able to make it past the Sirens?
4. If you could describe the Sirens voices in three words who do you think you would describe it based on Ulysses reaction when he heard it?

Direct Quotes:
In this chapter there were a few important direct quotes which are very significant to the story.


" He was filled with such a fury of desire that he swelled his mighty muscles, burst t﻿he raw hide bonds like thread and dashed for the rail."(pg.88)
This quote shows how helpful the gods and the dead truly are. If Ulysses and his crew weren't prepared for the Sirens they couldn't have survived because they could barely survive even with the preparation. Thus saying without being advised by the gods and the dead his crew and him couldn't have made it as far as they have. But our first impression of the gods were that they were the only thing holding Ulysses back from returning home to Ithaca. So the significance of this quote completely contradicts with our first impression of the gods.

" But the appearance did not motion their voices, for they were birds, huge birds larger than eagles. They had feathers instead, and their hands and feet were claws. But their faces were the faces of young girls"(pg.89)
I thought this was a shocking quote because before i read this paragraph I thought of them to be beautiful sisters but they turned out to be creepy looking bird-humans.


" For now he heard the whistling gargle of a whirlpool, and he knew that they were approaching the narrowest part of the straight, and must pass between Scylla and Charybdis"(pg.90)
This quote is important because it really shows the mood of the entire book because right after they pass one obstacle, they already hear the whirlpool. The books overall mood is nonstop suspense. 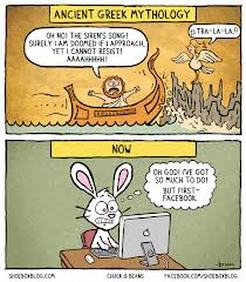 Research:
In the days following January's horrific mass murder in Tuscan, the chorus of voices calling of new gun laws. The voices are acting like the siren's song and are making the government change the gun laws to prevent protests.
Nraila.org